Like all materials commonly used for recording information, tape is subject to deformation due to poor storage or handling. If a tape is stored for a period of time when not wound smoothly or evenly, the tape may become physically stressed. The risk of deformation is exacerbated by exposure to excessive temperature or relative humidity levels. “Every time a tape pack is heated or cooled, the tape pack tension will increase or decrease, respectively.”1

Once deformed, proper tape-to-head contact becomes compromised, leading to a number of possible audio or visual anomalies, or in some situations causing further damage, during playback. Gfeller et al. offer a detailed discussion on the resulting errors, curvature error and edge curl:

With curvature error, “the image is played back at normal speed, but one or two horizontal bands of noise are superimposed over the image. The noise bands may drift vertically and the severity of the picture noise may vary. If the manual tracking control is used, the noise bands shift vertically but never completely disappear. Audio on the longitudinal track is not affected. However, if FM or PCM audio is recorded on the helical track, even a slight tape deformation may cause it to become totally inaudible.”2

With edge curl, “the picture is noisy along the top or bottom edge. The severity of the picture noise may fluctuate. One of two other symptoms may also occur: either the image appears as a vertically rolling picture, or the audio is distorted. In the latter case, the audio may fluctuate in volume, alternate between sounding muffled and sounding sharp, or become totally inaudible.”3

Damage to the signal in a deformed tape is often irreparable. However, in those cases where further handling and winding does not pose a risk of further tape damage, there is a remedy which can reverse some of the deformation so that tape-to-head contact is improved in playback. Iraci writes, “Problems related to a poor-quality tape pack can often be eliminated by rewinding the tape properly. To produce a wound tape pack that is at the correct tension, fully supported by the hub, centred between the flanges, and smooth on the surface, run the tape continuously to the end without starts and stops using the play mode on equipment that is clean and properly aligned. Do not use high-speed rewind or fast forward modes because these produce uneven tensions in the reel of wound tape.”4

Once wound properly, return the tape to storage for an extended period of time. Iraci suggests a duration of “several months at room temperature or several days to weeks at higher temperatures (less than 50 degrees C).”4

If the tape deformation is too severe and handling is too risky, consult a media preservation professional. 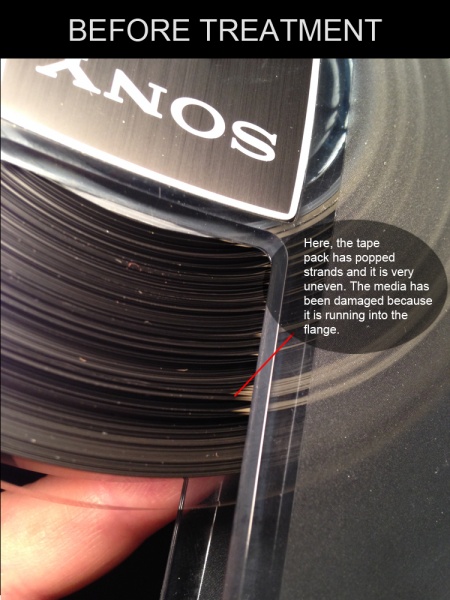 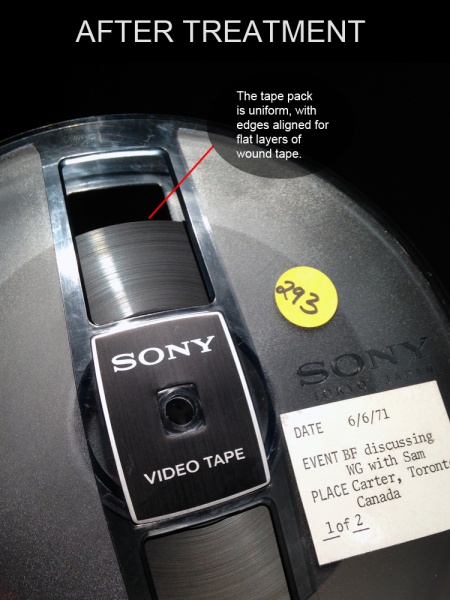