The term “bearding” describes horizontal black lines or “spikes” that appear to the right of a video image’s brightest areas.

A common artifact between families of formats such as 1/2” open-reel EIAJ or VHS, “bearding” can be traced to an overloading condition in VTRs that occur as a result of a frequency mismatch between the source signal’s recorded bandwidth, and that of the resulting playback. As a picture’s peak brightness levels are “clipped” by the recording and playback frequency mismatch, the resulting illegal black spikes may cause disruptions in the signal’s horizontal sync, generating further time-based issues and conditions throughout playback.

Determine first if the tape format and playback deck are compatible. S-VHS decks are backwards compatible- they can play VHS and S-VHS, however VHS decks cannot play S-VHS tapes.

If the bearding is recorded into the image, there is no way to remedy the artifact. 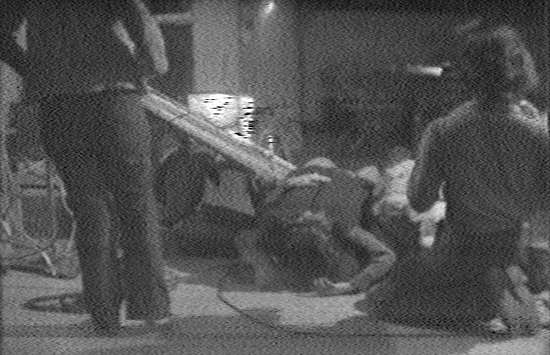